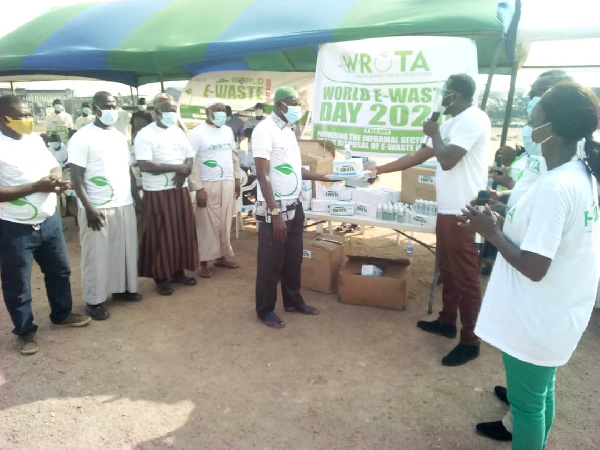 Ghana on Wednesday October 14, 2020 joined the international community to mark International E-Waste Day with a call on the citizenry to collaborate in adopting the best possible way of handling e-waste in the country.

Ghanaians were also urged to change their attitudes on how they dispose of e-waste including large appliances such as washing machines, refrigerators, microwaves and small appliances like irons, hair dryers, TV equipment etc.

The President of E-Waste Round Table Association (E-WROTA), Mr Gilbert Odjidja, made the call during the commemoration of the third international e-waste day held at Agbogblosie Scrapyard, Accra.

The event, which was on the theme: “Partnering the Informal Sector for Safe Disposal of E-Waste in Ghana,” was organised by E-WROTA in collaboration among Greater Accra Scrap Dealers Association (GASDA).

It brought together environmentalists, members of the Environmental Services Providers Association (ESPA), scrap dealers among other stakeholders.

The world event, adopted in 2017, is marked on October 14, every year, and it allows the world to focus on dealing with the e-waste menace.

According to Mr Odjidja, the dangers of burning e-waste were real and, therefore, posed grave threats to both the environment and lives. He, therefore, entreated Ghanaians to bring their electronic scrap components to his outfit for purchase.

Vice President of E-WROTA, Ms Vivian Ahiayibor, cautioned members of GASDA on the health implications of burning e-waste. She advised members of GASDA to directly deal with her association which was well-versed in “proper e-waste disposal” practices.

WROTA executives used the occasion to present items worth GHC20,000 to GASDA to ensure their members were safe during this COVID-19 pandemic era.

Receiving the items, the Secretary of GASDA, Mr Mohammed Ali, expressed his association’s appreciation for the gesture. He said the government was doing a lot in the e-waste space to ensure public safety.

For instance, he said, the Environmental Protection Agency (EPA) had been doing its bid in terms of education on the dangers of burning e-waste including other solid waste.

“I can say that the due to the education, burning of waste has reduced to about 90%,” he noted.

He was hopeful that the frequent reminders on the dangers posed by burning e-waste, would drastically reduce the practice.

E-waste
© E-WROTA. All rights reserved.
Designed by Atlantic Systems & Solutions
Back to Top